There be Giants in the North 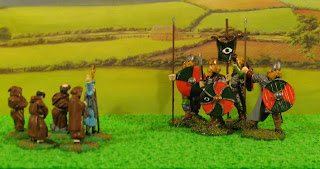 The Abbot of Wuduceastre has journied north to a meeting with the giants of Caer Tidi to resolve a minor border dispute. The giants are gentle by nature and refer to ordinary size folk as the 'little people', their manner being slightly gruff is often offputing to men. In general they fight with men against common threats; the last being a dangerous dragon.