Of Maps and Warnings.

Sven and Ivaar sat together at the stern of Svens longship, and discussed their findings to date.
The map, recently gained was strange indeed, in two parts, made of metal and engraved, each formed half a ring, which would fit within the other, A thing of two parts indeed and each different from the other.
It would need further study.

Turning to the scrolls they reread the words, translated from the Latin
by a team of priests, of The Dean 501.11

To any who seek to seize the Whorled Cup and raise it high in triumph ,
I proffer only words of Warning;

Tho ,the minstrells may sing, the Skalds retell, the common people chant,
of your success; There is but passing glory. There is no Saga here.

Seven rounds must be entered in and seven rounds be gained,
before that final conflict when all is left to chance.
Along your path to Wem Burgh Lee lie trials and tribulations,
To test the strongest men.
For no one man can win the prize and no one man can hold it
for more than four short years.

Upon those fields of verdant green, there still lie many perils.
Beware the posts and beams that bar and block your blows,
the lines you must not cross,
The banners at the corners that mark forbidden paths.

Of accident and injury you to, must be aware,
for even Odins magic sponge cannot return the dead to life.

Beware,beware, beware again, The pictures of the Gods,
Those cards of Red and Yellow from the book of FA.

Beware again, A priestly man, dressed all in black,
Tho` poor in sight and slight of build, he holds a certain power,
to deny, penalise and banish to obscurity all who break his rules,

Before the final whistle of that final match, every nerve and sinew
will be tested to the utmost lengths.

Then and only then, unless the Gods decide
to extend the hours into Extra time.
Will the cup be truly yours, to have your name inscribed.
As one who for a short while was known both far and wide.
Upon your own head be it,
for only you decide,
to hunt for passing glory.

Sven Eriksen and his men drop in on the coast of the continent on their way home ..


---oXo---
The men in the watchtower spot three sails by the coast, they lose sight of them as they pass a forested headland; just in case of trouble the men assemble ... 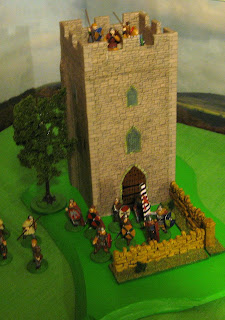 One of the viking ships has come up the estuary and makes land near a village ... 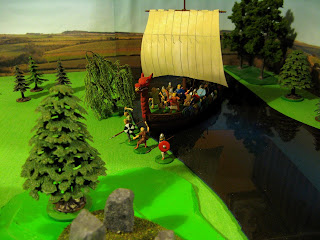 The vikings move slowly inland towards the village ... 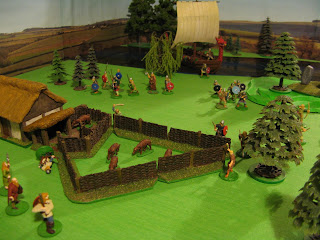 The lookout at the watchtower has seen the viking ship in the estuary and the men make their way to help the nearby villagers ... 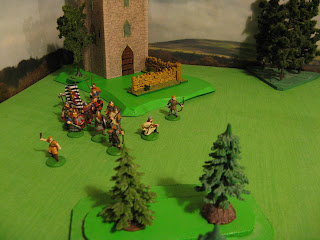 The villagers have armed themselves, but seeing there are too many vikings fall back to safer ground ... 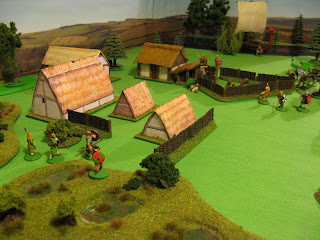 The villagers make a stand in front of the old ruined shrine of St Gatien... 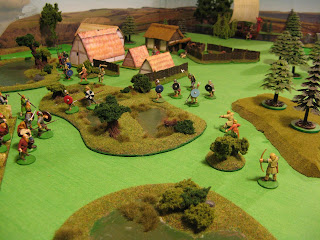 The vikings move through the surrounding marshland and charge in to the attack, their archers hang back and pick off a few of the defenders... 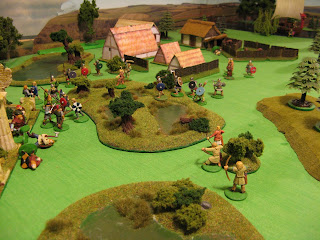 The villagers are losing ground .... 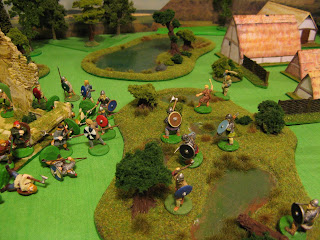 The men from the watchtower have arrived and taken up position in the shrine .. 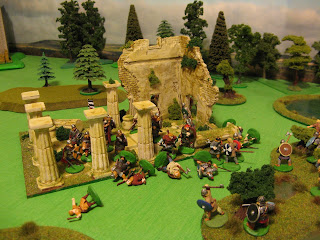 The vikings are undeterred and press home their attack ... 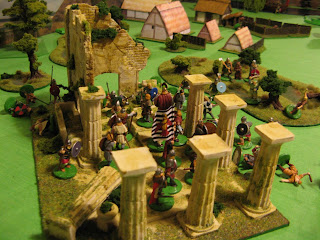 The vikings draw back, the defenders of the shrine are surrounded and being picked off slowly by the viking archers .... Sven Eriksen offers to spare their lives if they agree to a 'fight of champions'. If they win the vikings will leave, if not they may leave with their lives. 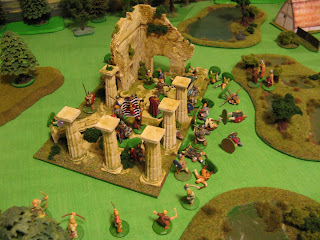 The two champions approach each other while the men both sides watch intently ... 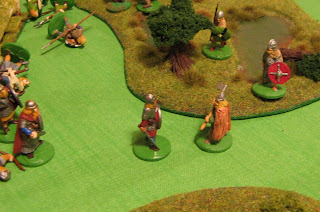 The combat continues for some time, however a swing from the vikings' champion mighty axe wins the contest ... 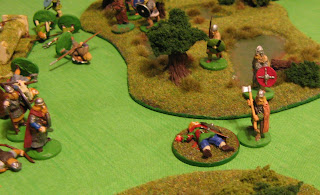 The defenders leave the shrine, taking their wounded. Sven Eriksen and Elfric (a monk) examine the relics of St Gatien. 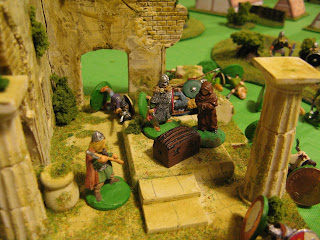 Elfric finds the thing they are looking for - a piece of parchment showing part of a map, he carefully closes the casket and returns it to the shrine. The vikings leave, after a brief stop at the village to steal all the food and livestock - then burn it down.
Posted by tidders2 at 19:43 5 comments:

Isle of Sceapige (8) - the Vikings leave

Shortly after Sven Eriksen and his men assaulted and took Drengham,  Ivar Redbeard arrived in his longship. Ivar had been raiding further down the coast, but had lost half his men in the process of his last raid as the local fyrd had got between them and their boats - they cut their way through but only managed to get away in Ivar's longship.

After a discussion Sven and Ivar decided to head for home, they had amassed a plenty of booty.  However Sven wanted to make one more 'raid' on the way back to obtain part of 'the map' for the location of the Whorled cup. The vikings systematically stripped what they could in terms of livestock and food from the island and set all the buildings alight. They then set off  ... 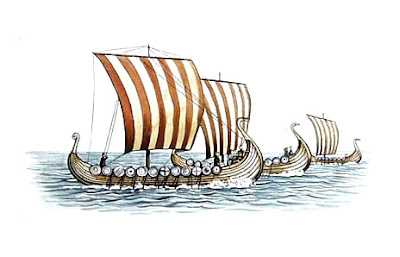 I finished off the two larger buildings shown in the previous post and stuck them onto card bases, this also helped strengthen them up some more. I also completed two small A frame ones. One thing I found was that you need to fold down the thatch ends to increase the impression of thickness or the roof. I carefully painted in an extra door at one end of the long house. Bases painted brown with some static grass added. Completed buildings shown below with one of my scratchbuiltt from cardboard and fur thatch ones for comparison. 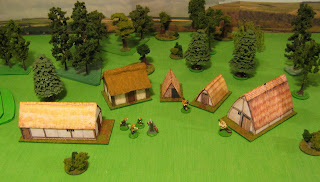 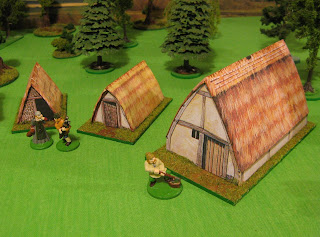 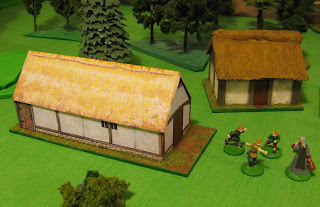 I like them - probably make a couple more small A frame ones, I'll also investigate some of the other construction sets in the series. The A4 books have the all the parts printed on a slightly shiny thin card, so scanning them and re-printing them gave a matt finish which is more appropriate - worth the effort of scanning and enlarging, so now I have the images done I can print off more as needed; I may darken down the thatch roofs a bit though.
Posted by tidders2 at 11:09 8 comments:

A post on Defiant Principality blog showed some paper/card houses for Medieval Town and Village. I bought one of the Medieval village (available from papel3d). They also make a Viking stronghold set as well - may be worth a look. 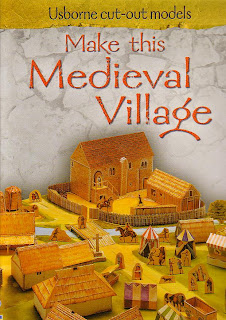 The buildings are 1:87 scale; great for 15mm, but a tad small for 25/28mm. I opted to scan in the most suitable ones and enlarge them by a factor of 1.5 and then print on 210gm thin card. They do need some stiffening, so some card supports are needed for the long buildings; 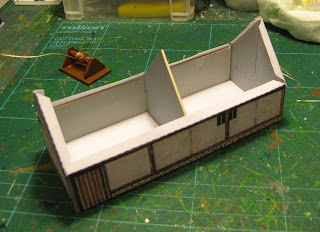 for A frame style buildings I just put a central stiffener in which works fine. 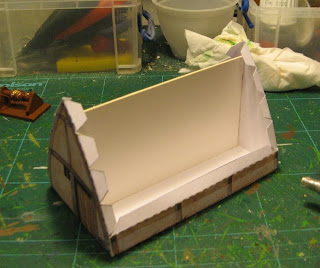 I'm also making up two small A frame styles buildings as well.  After adding the thatched roofs I found I heed to touch the dotted 'fold line' out carefully with some thinned paint of a similar colour.  Next step stick to bases and add some static grass - piccies to come when done.
Posted by tidders2 at 15:25 2 comments: