Hagrid Hagridson, a dull unimaginative fellow has long had his eye on Freya, daughter of Leif Gugnirson, Svens shipmaster, and now with her father away, he seeks to take advantage of the situation.
Leaving his ship in the next Fjord he marches his men round to approach the settlement unobserved. 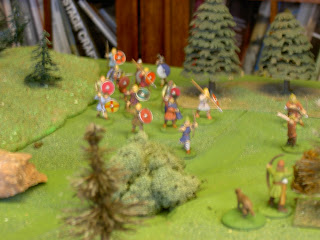 A lone hunter and his dog out in the woods stumbles across them but is shot down in a flurry of arrows, The Dog, howling his anguish leaps on the attackers teeth bared, but is soon dispatched. 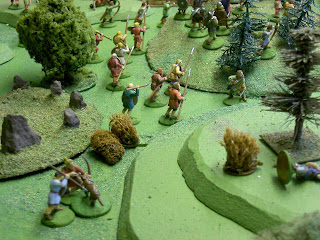 The sounds have alerted the menfolk at the settlement and they rush to see the cause to find Hagrids men pouring from the undergrowth. 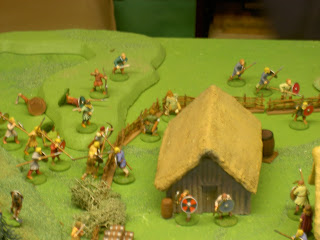 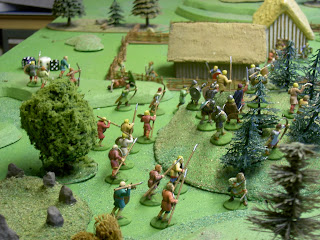 The archers fire , cutting down two of the attackers, but others are coming round the back of the houses. The alarm is raised and defenders hurriedly grab their arms and armour and rush to defend the homestead. 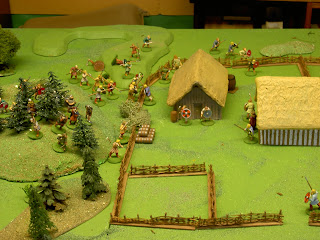 The men at the fences are overwhelmed and cut down, selling their lives dearly. 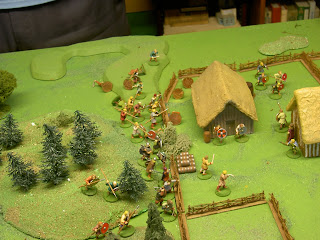 The hearthguard, seeing they are outnumbered take position at the doorways where only ability counts, not numbers.But find their abilities insufficient and after heavy fighting they are cut down.

The looting commences whilst Hagrid confronts his bride to be. Bitter words are exchanged, before a shout from outside warns Hagrid of approaching danger. Some of Gugnirs' men have come down river, summoned by the sounds of battle 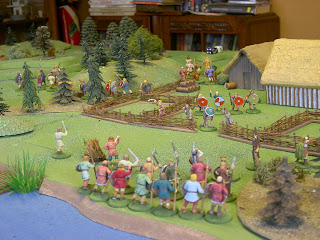 Leaving a rearguard Hagrid leads his bride away, his men struggling under the piles of loot. As more of the defenders forces form a shield wall and advance on the settlement. 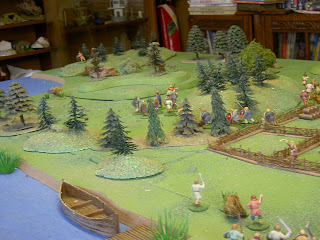 Burdened by their loot, some of the men begin to lag behind. 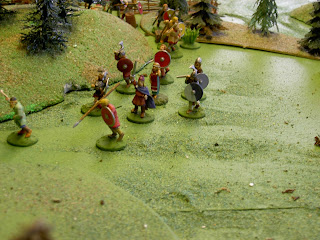 Hagrid's party is soon split into three parts, He moves on leaving those carrying loot and the rearguard to catch up, but the groups become widely separated, each taking their own route back to the boat. 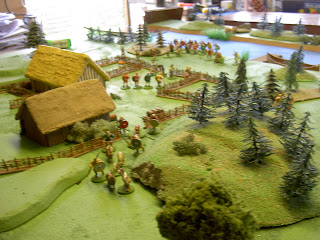 As more of Gugnirsons' men appear across the river bank, Hagrid knows he must move rapidly to avoid being caught. 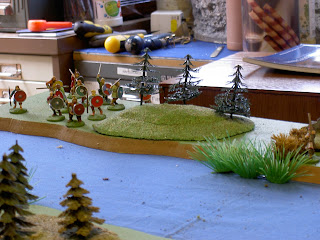 It remains to be seen if he and his men can regain the boat before vengeance catches up with him.
Posted by Douglas at 18:54 2 comments: