At the local tavern a wandering friendly dragon asks for a cask of ale, saying his throat is a little dry ... 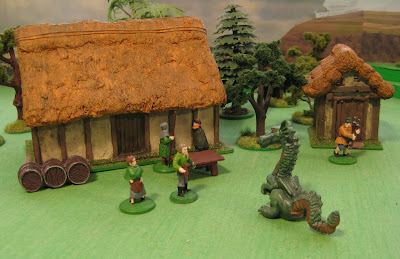 Tavern owner: sorry, house rule - I don't serve dragons - try the Red Dragon on the other side of town ...
Posted by tidders at 12:18 3 comments: 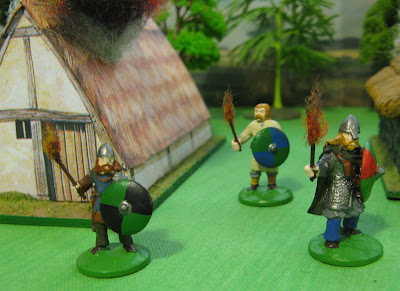 Doing some conversions for warriors carrying booty of some form - I've opted for sacks of swag using green stuff,  re-positioning arms as needed. Three spare foundry vikings get the treatment ...

The Island of Temples


Svens' Quest continues,  hearing of an island nearby that matches a description in the Chronicles of the Cup. He decides to leave the bulk of his men resting and takes a small boat to investigate.

As they approach they can make out a small jetty and a path leading inland between two strange statues. 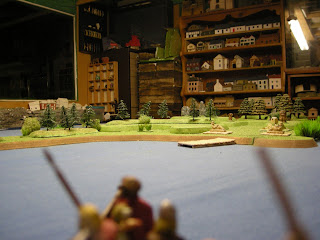 A birds eye view would tell them more, but denied this they approach cautiously. 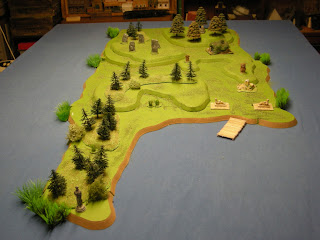 Seeing nothing untoward they moor at the jetty, and move inland. 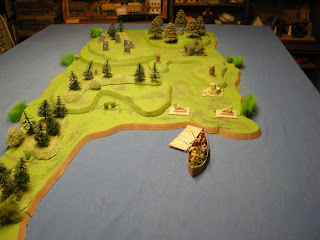 As Sven and his men pass between the twin statues, a growling dog emerges from the undergrowth, followed by two others.
One leaps, and a man goes down with a dog at his throat, he will not rise again. 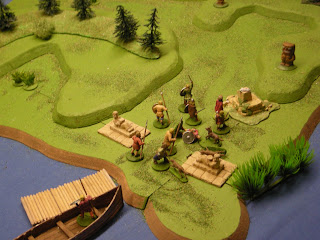 Two of the dogs are killed by the spears of the Vikings and the third slinks away,
Pausing to dress the bite and scratch wounds, and fearful of the madness disease carried but such animals, They read the inscription carved beneath the statues.

It tells that there are more gods than they might know of and to survive they must pay tribute to each of the shrines upon the island.

Moving inland they come across a small house with rounded door and windows, men whisper that it is the home of the Halfpeople of legend.
As the door opens the men stop and huddle fearfully in a poor semblance of  a shieldwall.

The door opens fully and out steps a young looking woman dressed in a snake and little else.

Whilst Sven gazes thoughtfully at a circle of standing stones, his shipmaster speaks with the snake lady. 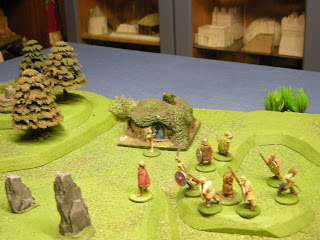 She tells that each of the altars holds a secret, a gift for the humble and a danger for the unbeliever.
Taking her words to heart, Sven picks a small bunch of yellow flowers and gifts them to the lady.
She thanks him for his courtesy, unusual in one of his race and adds that each temple holds the key to the next, so a widdershins sequence must be followed.


The men move on uphill and come upon a crystal skull resting atop a stone altar, Sven believes this is the gift and places an offering of wild flowers in its place. As he does so he notices an inscription which reads "Five Stones you see, but six there be. Kneel upon the sixth and the earth will yield its secrets. 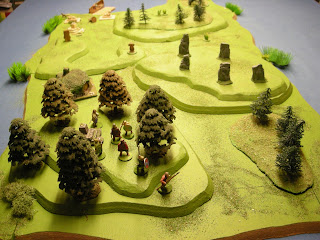 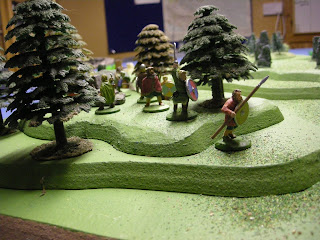 Advancing further into the woods, expecting an attack at any moment, they find they have reached the end of the island, and turn back along the coast to the stone circle they observed earlier.
As they approach, Sven can indeed see that there are only five stones, he approaches the centre of the circle carefully lest his next step set off some awful trap, His   men arrayed in a defensive circle of their own, beneath his feet, he feels another stone beneath the turf and kneels to face the northernmost stone. From this position he can just make out a line of Runes, making no sense of them, he decides to copy them for later study, then before he leaves he removes his cloak and leaves it as an offering to the spirit of the stones 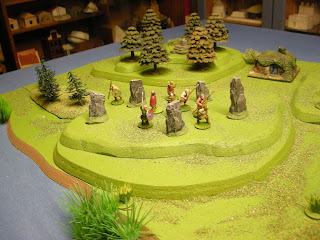 The party moves downhill, expecting misfortune at every step, so far they feel the gods have been smiling on them 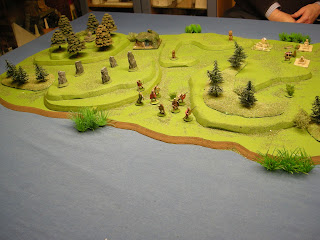 Hugging the coast, they press onwards, until they reach a small forest.
From which leap three large hairy apemen. 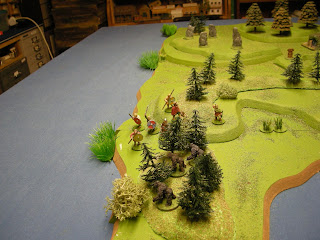 Leofric raises his bow and fires hitting one and then another, but the barbs do no damage and the further enraged beasts spring forward with a roar,
Svens men form a hasty battleline and roar out their own challenge, which seems to have some effect and the beasts amble off. 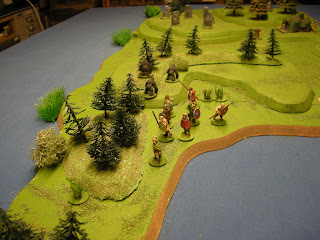 Shaken by the confrontation and eager to depart the island the band head towards the last idol, a stone statue of a lady dressed in flowing robes. 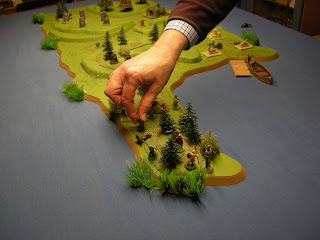 They are too eager, the ground gives way beneath leofrics feet and he plunges into a hunters trap, breaking his neck, Geofric is luckier and sustains only a broken arm.
Hauling him out and roughly binding the injury Sven decides the island has had enough of he and his men, and decides to return to the boat. The Gods have stopped smiling. 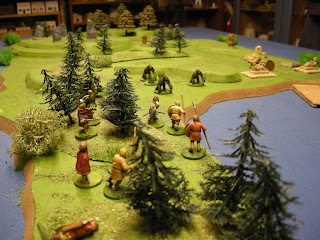 On their way the are shadowed by the great apes and pass by the surviving dog standing guard over his prey. But pass on without incident. 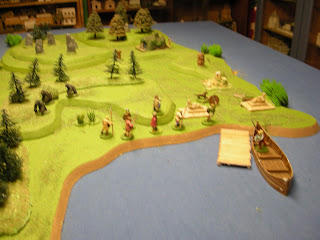 They are just approaching the jetty when they are challenged by alone warrior who seems to have sprung from the very soil.
He announces that he will fight their champion, if he loses the contest they must stay on the island forever, unless they can defeat the next arrival. He has been waiting seven long year. 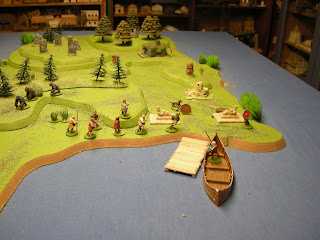 Ulfric Hagarsson leaps forward, whilst not the best fighter he is desperate to leave.
The contest flows back and forth no man able to strike a telling blow, soon both are running with sweat and rivulets of blood.
Ulfric leaps forward again, but slips, is it all over? 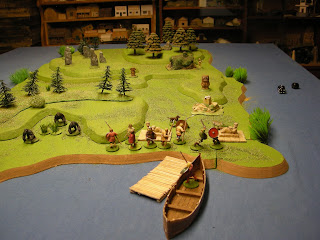 But NO, the Lady is smiling on him, the Hero, flustered by this and blinded by the sweat stumbles forward to impale himself on Ulrics desperately poised sword. 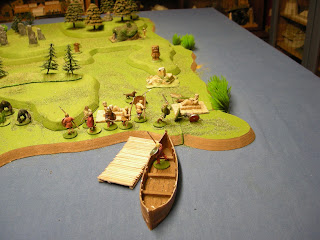 They waste no further time embarking, and leave the island, The blood attracts some ocean predators, but they sail past, relieved at their escape. 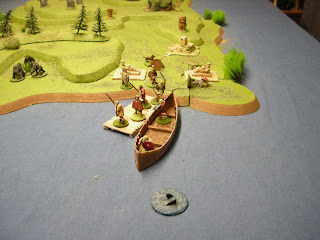 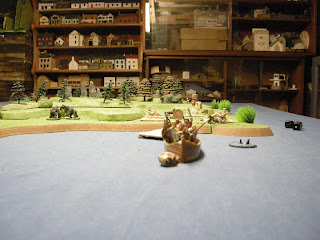 But their exhaustion has its benefits, No man has the strength to answer the sirens call. 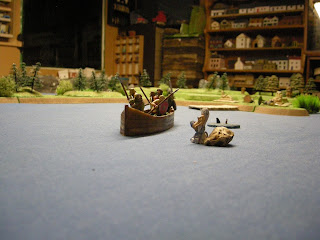 As the sail is raised, Sven reflects that it is time he returned home,
There are artifacts to decipher, Tall Tales to be told and Ale and Mead to be quaffed.